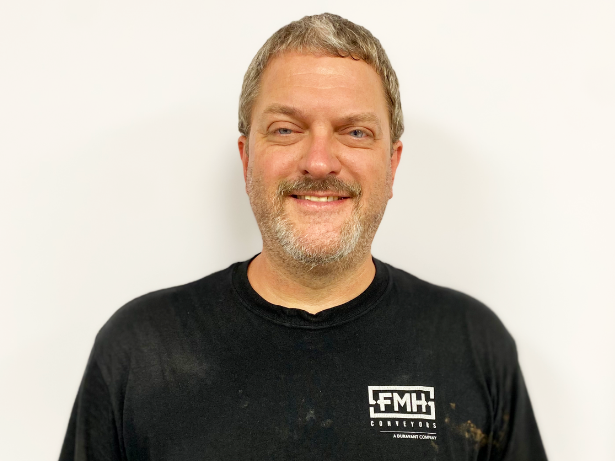 Born and raised in Jonesboro, AR, Brad graduated from Valley View High School and is practically a household name around FMH.

Although he started out in a temporary position, within nine months he was hired to the company full-time.  Brad has been a vital part of FMH Conveyors for the past 26 years.  He currently holds the title of General Fabrication Team Lead.  You can find him pulling parts, gathering jobs that need to be worked on, and cutting up with his coworkers.

Over the course of his career, Brad has learned that, “You better be ready for change. It happens a lot.” That holds true when considering his goals for FMH.  Over the next decade, he hopes for more growth and expansion of the company.  He enjoys the pay and benefits offered by FMH and having the freedom to get his work done without being micromanaged.

Brad and his wife, Crystal, have been married for 21 years.  The couple share three sons; ages 17, 14, and 9. In his spare time, you can find Brad listening to Metallica and working on vehicles. His dream car project would be a 1967 Chevy Camaro.

We truly appreciate Brad and the rest of the FMH family for all their hard work.

This website uses cookies to improve your experience while you navigate through the website. Out of these, the cookies that are categorized as necessary are stored on your browser as they are essential for the working of basic functionalities of the website. We also use third-party cookies that help us analyze and understand how you use this website. These cookies will be stored in your browser only with your consent. You also have the option to opt-out of these cookies. But opting out of some of these cookies may affect your browsing experience.
Necessary Always Enabled
Necessary cookies are absolutely essential for the website to function properly. These cookies ensure basic functionalities and security features of the website, anonymously.
Functional
Functional cookies help to perform certain functionalities like sharing the content of the website on social media platforms, collect feedbacks, and other third-party features.
Performance
Performance cookies are used to understand and analyze the key performance indexes of the website which helps in delivering a better user experience for the visitors.
Analytics
Analytical cookies are used to understand how visitors interact with the website. These cookies help provide information on metrics the number of visitors, bounce rate, traffic source, etc.
Advertisement
Advertisement cookies are used to provide visitors with relevant ads and marketing campaigns. These cookies track visitors across websites and collect information to provide customized ads.
Others
Other uncategorized cookies are those that are being analyzed and have not been classified into a category as yet.
SAVE & ACCEPT